Back to the Future: The Game

For the NES game, see Back to the Future (video game).

Marty: "Usual? You lead a pretty unusual life, Doc."
Doc: "It's an unusual universe, Marty."
— Conversation from the game

Back to the Future: The Game is the name of a series of episodic adventure video games developed by Telltale Games. The first episode was released as a digital download first for Windows and Macintosh in December 2010, then iOS, Nintendo Wii and PlayStation 3.[1][2] Subsequent episodes were released in 2011.

On October 13, 2015, the 30th Anniversary Edition of the game was released for the PlayStation 4, Xbox 360 and Xbox One consoles, with a few updates to textures and some new content, including video interviews.[3] Most notably, the re-release was updated to feature the voice talents of Tom Wilson.[4]

Bob Gale advised on the narrative of the series, and Christopher Lloyd reprised the role of Dr. Emmett Brown.[5]

The voice of Marty McFly was performed by AJ LoCascio, a voice actor who had submitted a demo of some of Marty's lines from the films, and was found surprisingly close to Michael J. Fox's voice.[6] While Fox did not reprise his role of Marty, he did give Telltale Games the rights to use his likeness from the films. By Episode 5, Fox did contribute to the game, voicing other roles such as William McFly and three older Marty McFlys from three different alternate future timelines. Michael X. Sommers portrayed the voice of George McFly.[7] It is unknown if Crispin Glover was offered a chance to reprise the role or whether he gave permission as Fox did (or if he was even asked) to use his likeness.

James Arnold Taylor, better known as the voice of Obi-Wan Kenobi in Star Wars: The Clone Wars, was the voice of Young Doc and Andrew Chaikin was the voice of Biff Tannen and his siblings.[8] Despite reports on IMDB.com, Tom Wilson was allegedly not offered the voice role of Biff Tannen in the game[1] although Dennis Lenart, the game's director, maintains that Wilson wasn't available at the time the original game was being produced, but was “totally on board” to reprise his role for the re-release.[9]

In an interview with James Rolfe from Cinemasscre, LoCascio noted that he had sent in a message directly to the president of Telltale in the voice of Marty, and that he was chosen over James Arnold Taylor. LoCascio, at the time, had finished recording the first of five episodes that would be downloaded for PC and Mac. The console versions were released as both a digital download and a hard copy.[10]

On May 14, 1986, Marty McFly is trying to adjust to a life without his best friend, scientist Doctor Emmett "Doc" Brown, whose belongings are being sold off by the bank following his disappearance six months ago. Marty is surprised when the time-traveling DeLorean suddenly shows up without a driver, a recorded message from Doc explaining that he had built a safety device which automatically returned the car to the present, presuming he might get into trouble in the past and trusting Marty to save him. Using clues in the car, Marty visits the elderly Edna Strickland, a former reporter, and finds that Doc, posing as "Carl Sagan", has been stranded in 1931, charged with the arson of a speakeasy under the mob boss Irving "Kid" Tannen's control, and was killed by Tannen's gang the next day.

Marty returns to 1931, and with the help of Doc's younger self Emmett and Marty's grandfather Arthur McFly, he is able to rescue Doc safely. As they are about to return to the future, Marty finds himself disappearing, a result of Artie being killed by Tannen's gang.

The two return to town to correct the timeline, further engaging the help of Trixie Trotter, Tannen's moll, and Officer Danny Parker, Jennifer's grandfather. Their involvement causes Emmett and Edna to meet, and the two fall in love, unbeknownst to Doc or Marty.

Doc and Marty attempt to return to 1986, but when they arrive, Doc disappears and the car crashes outside the walled city of Hill Valley, run as a totalitarian society by Citizen Brown, a parallel version of Doc.

As Marty investigates, he meets his parents and Jennifer and finding they live in fear of Citizen Brown. Marty soon learns about Edna's influence on Emmett's life, and she used him to enforce her moral standards to create a perfect, crime-free society. Marty is able to convince Citizen Brown of his true calling in science, much to Edna's dismay. Brown helps Marty to fix the DeLorean, and the two return to 1931, a few months after their initial encounters there.

They find that Edna is trying to guide Emmett's scientific genius towards law-abiding, social conditioning technology. Though Marty insists they help Emmett to get back on his own work, Brown becomes concerned that Marty couldn't care less for Edna's or Brown's own future, and he drives off. Marty successfully breaks Emmett's and Edna's relationship, and Emmett comes to realize science is his true calling.

At the science expo, Brown and Edna have worked together to delay Emmett from displaying his flying car, but Marty rescues Emmett in time, and exposes Edna as the speakeasy arsonist. Though Emmett is briefly distracted by the arrival of his father, Marty is able to help the two make amends, and the demonstration is a success. Marty finds that Edna has stolen the DeLorean and disappeared somewhere in time. Citizen Brown gets hit by the fleeing DeLorean, and fades away, his timeline erased. But soon Doc, as Marty knew him, arrives.

As they greet each other, Hill Valley fades away around them, and they worry Edna has changed the past. After meeting Marty's great grandfather, they find Edna, elderly and living alone, and learn that she had traveled back to 1876 and had set Beauregard Tannen's saloon on fire, accidentally destroying the rest of the town in the process. They are able to catch up to Edna in the past, prevent her from burning town the tavern, and return her and the DeLorean back to 1931, where she is arrested and put in jail with Kid Tannen. The second DeLorean fades away, having become unstable. Marty is initially shocked when he learns that Artie is marrying Trixie, but is relieved to know that was only her stage name, and his family line is still intact.

Doc and Marty return to 1986, where Marty finds nearly everything is the same as when he left. In this timeline, however, Doc had never disappeared, instead staying part-time in his father's home along with Clara and his children. Furthermore, Edna and Kid Tannen have become married since their time in jail, and her own personality has turned around for the better. Doc presents Marty with a book, "The McFlys of Hill Valley", as a graduation present, which was the original reason he traveled back to 1931. Suddenly a familiar light and sound ring through the neighborhood. They are both surprised when three separate DeLoreans appear, and future versions of Marty demand that Doc and Marty come with them to correct the future. In a surprising reversal of roles, Doc is now the one to ask Marty of the future if they "become assholes or something". As the future group of Martys argue which is the correct future, Doc and 1986 Marty take off into time in their DeLorean. The exact time they head to is undetermined. The Game ends with "To Be Continued" displayed on the screen, inferring that there could quite possibly be a second season.

The Back to the Future video game series is set after Part III, in 1986, near the end of Marty's senior graduation. A large dispute over the game is whether this DeLorean is a new one or the original, re-built. There are several suggestions, for an example, in Episode 1, a tape recording of Doc tells Marty that he put an automatic retrieval feature in the DeLorean, which suggests that this DeLorean is a new one, or when in Episode 3 Marty also notes that Doc must have got the new car battery in 2015, suggesting Doc might have built the new DeLorean in 2015. Although as it turns out, in Episode 1 Doc says that when the DeLorean was struck by lightning in 1955, the lightning produced a temporal duplicate which was sent 70 years into the future, and Doc recovered it on a trip to 2025.

Here are also multiple references to the films:

In addition to the callbacks to the trilogy, the game would make references to many details not shown within the movies including:

Bob Gale hinted that the future might be looked at again, with Christopher Lloyd noting there might be automated vehicle systems. 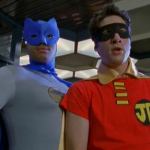