The Bootstrap Paradox is a theoretical paradox of that occurs when an object or piece of information sent back in time becomes trapped within an infinite cause-effect loop in which the item no longer has a discernible point of origin, and is said to be “uncaused” or “self-created”. It is also known as an Ontological Paradox, in reference to ontology, a branch of metaphysics dealing with the study of being and existence. -Astronomy Trek

"Guess you guys aren't ready for that yet, but your kids are gonna love it." - Marty after playing Johnny B. Goode

Since Back to the Future Pt. 1 is based in 1955 people had not heard of Chuck Berry's Johnny B. Goode. Since that is so, Marty has inspired (if you will) Chuck to record it and sell it as his own hit. If you remember, the movie shows Marvin Berry talking to Chuck Berry. During the call Marvin says "You know that new sound you're lookin' for? Well listen to this!" After that he holds up the phone so Chuck can hear Marty's playing. From that whole scene history repeats itself. Marty plays Johnny B. Goode, Chuck listens to him play, Chuck records the song, and Marty know what song to play and the dance. This, of course, is how the Bootstrap Paradox is formed.

Video of Johnny B. Goode: https://www.youtube.com/watch?v=S1i5coU-0_Q

If you want to see another example of the Bootstrap Paradox there is one in Doctor Who, were the 5th Doctor crosses timelines with the 10th Doctor. This mini-episode is called "Time Crash" 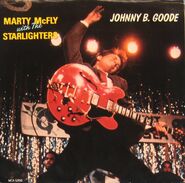 The 10th Doctor and the 5th Doctor staring at each other in "Time Crash".
Add a photo to this gallery
Retrieved from "https://backtothefuture.fandom.com/wiki/Bootstrap_Paradox?oldid=44760"
Community content is available under CC-BY-SA unless otherwise noted.