"He [Marty] looked at the array of switches and dials on the console [of the DeLorean time machine] with frightening bewilderment. What was the secret? A button? Something in the nature of a digital code? His eyes flew back and forth, trying to locate the solution to the mystery. / When he finally solved the problem, it was so simple he almost laughed. There, on the steering column, just like any other ordinary unsophisticated car, was an ignition switch and a key. / "I'll be damned!" Marty muttered. "
—From Back to the Future by George Gipe (quote, pages 65 and 66)

The DeLorean key was an object essential to activating the DeLorean time machine.

The key was used to open and lock the car's gull-wing doors, as well as switching on the ignition and starting the DeLorean time machine.

The first time the keys were seen was when Marty McFly escaped in the DeLorean in 1985; the keys were later seen in 1955 when the DeLorean's engine dies and Marty tries to start the DeLorean. The keys then appeared one last time just before the Libyans drive past Marty.

In 1845, the keys played an important role when Dr. Emmett Brown entrusted a pocket watch and the key to the DeLorean to his son Jules. A young pickpocket then stole the keys, which had a pocket watch attached to it. Jules and his brother Verne then pursued the thief but were caught by Murdock, the Fagin-like leader of the pickpockets, and forced to join the group.

In 1991, the keys usually resided on Doc's bedside table along with a few of his many clocks. The keys were taken by Jules Brown so they could go back to August 5, 1926, and prevent an accident, to eliminate Emmett's fear of fishing.

In 1992, Doc lost the keys at the Hill Valley Beach and kept looking for money so he could take a bus. He later found them a week later during the live-action segment of "A Friend In Deed".

Marty in 1985 turning the DeLorean keys. (Note the label attached.) 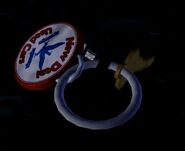 The DeLorean key as featured in "Get Tannen".

The DeLorean Key attached to a pocket watch in Back to the Future: The Animated Series.

The DeLorean key as featured in Back to the Future: The Game.

The keys as seen during the live-action segment of "A Friend in Deed" (hard to see).

The keys in "Einstein's Adventure".

The Taylor/Volvo key that was most likely used for the DeLorean. 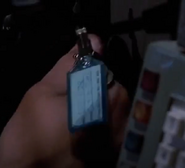 The keys in 1955 while Marty tries to start the DeLorean.

The DeLorean Keys as seen in Gone Fishin'

The DeLorean keys when Marty returns from 1955 just before the Libyans drive past, brightened and saturated for clarity.
Add a photo to this gallery
Retrieved from "https://backtothefuture.fandom.com/wiki/DeLorean_keys?oldid=59550"
Community content is available under CC-BY-SA unless otherwise noted.