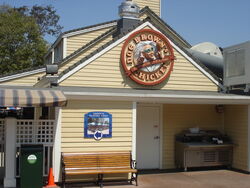 Doc Brown's Chicken opened in 1999. On the walls of the line queue, there were framed photographs of Dr. Emmett Brown in many different parts of the world:

It was a restaurant at Universal Studios Hollywood, that was located near the former location of Back to the Future: The Ride, which was replaced by The Simpsons Ride. In January 2014, Doc Brown's Chicken restaurant was closed.[1]

Universal has served chicken in the same general location since 1915. The original name for the restaurant was The Flower Drum Restaurant, and the restaurant that replaced Doc Brown's Chicken is named Cletus' Chicken Shack.

On the theme park's map, Doc Brown's Chicken was labeled number 4 on the restaurant choices. The slogan on its logo read "The Finest Chicken of All Time!" It served four choices of heart-healthy fried chicken for lunch and dinner.[2] There were photographs in the line queue that featured Doc proudly holding up a fried drumstick at famous landmarks and historical events from around the world. However, Doc was not portrayed by Christopher Lloyd in these pictures.

Doc Brown's Chicken offered barbecue sauce, ketchup and utensils for customers next to the restaurant.