The mansion was possibly in the possession of the Von Brauns who came into America from Germany. Doc lived there alone, using his fortune funding his scientific experiments. However, he also made use of the garage which was situated on the property. The mansion was opulently stuffed with a medieval suit of armor, an oriental statuette, a pipe organ, and of course Doc's inventions.

On November 5, 1955, Marty McFly found this address and saw his old friend when he was thirty years younger. At this time, Doc was working on his brain-wave analyzer and Marty was his first human test subject, the first overall being his dog Copernicus. When Marty convinced him that he came from the future and asked his help to get back, the two used the garage to hide and work on the DeLorean.

A week later on November 12, "another" Marty (being several hours older) approached him again. After Doc passed out, Marty brought him to the mansion. Marty stayed with Doc until November 16, planning for a way to go back to 1885 and save 1985 Doc's life.

The mansion burned down on August 1, 1962, and was sold to developers, as seen in a newspaper hanging on one of Doc's walls. After that, Doc stayed in the garage which, being a separate building, survived the fire. This setback did not seem to worry him as he continued his isolated life.

In the timeline in which Emmett married Edna Strickland, he never discovered the secret of time travel, meaning that the mansion did not burn down in 1962. By 1986B, it was used as a base for the Brown Institute of social science. 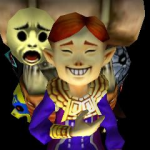