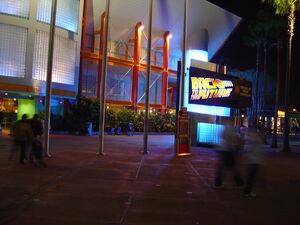 The Institute of Future Technology (I.F.T.) was Dr. Emmett Brown's research organization in 1991.

While some of its staff were in 1955, young Biff Tannen stole one of the new DeLorean time machines and began skipping wildly across the decades. Doc had been locked in his laboratory at the Institute by Biff, but used a remote control to send a crew of time travel volunteers in the 8-passenger DeLorean to follow Biff and 'bump' him back to the present by getting close enough and reach 88 m.p.h.

A demonstration model was built by Doc to demonstrate to the volunteers at the Institute exactly how time travel worked.

The events that led to Doc selling the Institute to Krusty the Clown in 2006 were developed as part of The Simpsons universe crossover to explain the history of the building. However, this information is non-canon.