Jaws 19 was a holofilm playing at the Holomax Theater in Hill Valley in October 2015, and was directed by Max Spielberg.

Apparently, critics thought Jaws 19 "lacked the bite" of its eighteen predecessors, and rated it low.

An article reviewing the movie, which was titled JAWS WITHOUT A BITE, was billed in the Newsline column on the front page of the October 22, 2015 issue of USA Today as appearing in Section D.

On passing the Holomax Theater on arriving in 2015, Marty McFly was 'swallowed' by a gigantic holographic image of the title character created by the building's exterior. Despite this, he thought the shark still looked fake. In all likelihood, his remark was unfair. The shark used in the advertisement hologram seems to have a deliberately cartoonish design, not at all approaching the appearance of an actual living animal. The hologram was obviously intended for tasteful marketing purposes and was not an accurate representation of the shark seen in the movie itself (such a cartoon-like beast would offer no suspense whatsoever).

From the movie poster, it can be gathered that Jaws 19 is at least partially set in some kind of underwater city — including an underwater Hilton, which can be seen directly above Max Spielberg's surname. Whether this is science-fiction, or such underwater cities exist for real in the future world of 2015, is perhaps best left to personal preference. 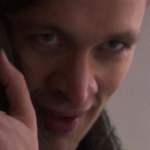