Start a Wiki
21103 Back to the Future Time Machine is a CUUSOO set, based on the DeLorean time machine from the film series Back to the Future. It was available for purchase at the San Diego Comic-Con on July 18, 2013 before its general release on August 1.

It is with great pleasure we reveal that the next LEGO CUUSOO set will be the Back to the Future Time Machine, based upon the LEGO CUUSOO project by m.togami and Sakuretsu. As one of the earliest projects on the site’s global open beta, headlines of a potential Back to the Future LEGO set was seen on popular sites including Gizmodo and Brothers Brick, helping LEGO CUUSOO gain massive appeal.

The final product is still in development in coordination with our license partner, Universal Partnerships & Licensing. We'll show the final model and you’ll be able to order your own copy when it becomes available in mid-2013 (exact dates and pricing to be determined).

Back to the Future DeLorean Time Machine

By m.togami* and Sakuretsu
After analyzing the supporters of the Back to the Future project, we learned that this product has a broad, worldwide appeal. The model presented in this project is built very closely to the LEGO Group’s design standards and has therefore provided a strong base to design the final product. It has a high play value and it fits well with supporters’ price expectations.

Future LEGO Back to the Future sets

The submitters of the DeLorean model, under the name Team BTTF, went on to create models for the Jules Verne Train and Locomotive 131, which contained motors and could run on LEGO train tracks. However, these models were never accepted by LEGO.

Back to the Future was later included as a franchise in LEGO Dimensions, which allowed the player to explore three different eras of Hill Valley.

This article uses material from the 21103 Back to the Future Time Machine article on the Brickipedia wiki at Wikia and is licensed under the Creative Commons Attribution-Share Alike License. 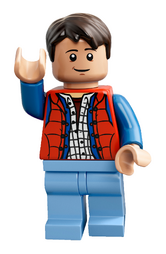 Add a photo to this gallery
Retrieved from "https://backtothefuture.fandom.com/wiki/LEGO_Back_to_the_Future_Time_Machine?oldid=49229"
Community content is available under CC-BY-SA unless otherwise noted.