They [Doc and Marty] set her [Jennifer] down on the porch swing. Jennifer began to snore softly. Marty guessed everything was going to be all right. But why did he still feel uneasy? Maybe it had something to do with the time traveling — sort of like jet lag. / Still, there was something different — he turned away from Jennifer, ready to follow Doc back down to the car [the DeLorean time machine] — but stopped when he saw the heavy iron grillwork that covered the windows to either side of the front door. / "I must be crazy," he muttered, half to himself. "I don't remember bars on these windows." Maybe, he thought, that time-lag business played tricks with your memory, too. From Back to the Future Part II by Craig Shaw Gardner (quote, page 97)

The Parker residence was a house in Hill Valley in 1985, and the home of Jennifer Parker. Its number was 161.

The house was also seen in 1985A with security bars on the windows, bushes all over the house, and a smashed AMC Hornet in the driveway.

As with the McFly residence, which was occupied by an African-American family, it's possible the house wasn't actually occupied by the Parkers in 1985A when Marty McFly and Dr. Emmett Brown left Jennifer on the porch swing. 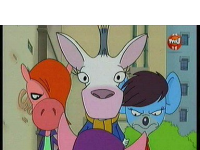