"How did I ever expect to get back? One [plutonium] pellet, one trip. I must be out of my mind!"
—Doc, preparing to travel to 2010 but remembering just in time he has forgotten the plutonium case

"His [Marty's] eyes fell on the dashboard readouts once again. One in particular caught his eye. It was located directly below the Plutonium Chamber, a flashing light that blinked EMPTY over and over."
—From Back to the Future by George Gipe (quote, page 76)

The roentgen meter was a meter on board the DeLorean time machine that measured the amount of radiation in roentgens produced by the plutonium powering the flux capacitor.

When the plutonium chamber ran out of fuel, an alarm sounded indicating refueling. This occurred to Marty McFly after he arrived in 1955 without any more plutonium. Dr. Emmett Brown had been about to load the plutonium case into the DeLorean at Twin Pines Mall prior to his planned trip to 2015, but was prevented from doing so by the arrival of the Libyans. Coincidentally, the engine also ceased to run. The roentgen meter was one of the many items that Doc had annotated with Dymo labels.

The roentgen meter in the restored Part III DeLorean.

The roentgen meter during the train ride to the future. 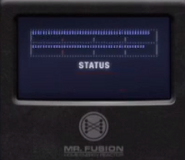 The Mr. Fusion meter from Back to the Future: The Game.