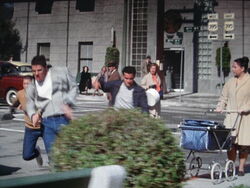 On the night of November 12, 1955. Marty drove the DeLorean time machine up Second Street to reach the lightning bolt at the clock tower. Soon thereafter, a second version of Marty ran onto Second Street from behind the courthouse to encounter Doc. Upon re-entering 1985, the DeLorean containing the first Marty exited out of temporal displacement the end of Second Street, and collided with the front of Town Theater.