Marty: "Whoa! Heavy!"
Doc: "Heavy indeed! 2,796 pounds to be exact. After all, there's a car in there."
- Marty Struggling to lift the Suitcase DeLorean From  Back to the Future: The Animated Series: Brothers.

The DeLorean time machine had the ability to convert into a suitcase which Doc had invented to store the car. The DeLorean would contract and shrink and then finally seal shut only to open at the sound of Doc's voice or Einstein's bark.

The suitcase would be unmovable by normal effort, as it was still a car, but a forklift could pick it up and move it around. This feature could only stop the DeLorean from getting stolen if it was parked in the street and it made the time machine easier to hide. However, this function is only believed to exist in the animated series. 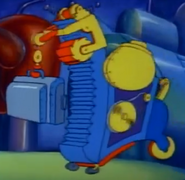 The collapsable forklift carrying the DeLorean.

The DeLorean Convering into a suitcase from "Brothers." 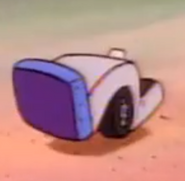 The DeLorean Becoming a Suitcase From "Roman Holiday" 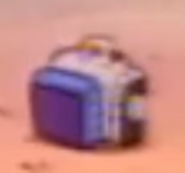 The New DeLorean as a Suitcase as seen in "Roman Holiday." 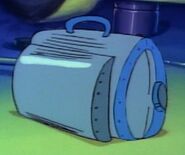 The Suitcase as seen in "Brothers." 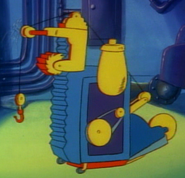 The Forklift that carries the Suitcase.
Add a photo to this gallery

Retrieved from "https://backtothefuture.fandom.com/wiki/Suitcase_conversion_for_the_DeLorean?oldid=57992"
Community content is available under CC-BY-SA unless otherwise noted.