The cops picked Jennifer up and carried her to the police car. / 'Oh, no!' Marty whispered as the police car took off — straight up. The cops had Jennifer, and were taking her home. Home? Who knew where home was? / He had to find Doc Brown right away!From Back to the Future Part II by Craig Shaw Gardner (quote, page 54)

They found Jennifer Parker in the alleyway where Dr. Emmett Brown hid her temporarily and, after verifying her identity and where she lived using an identa-pad, returned her to the McFly residence in Hilldale. 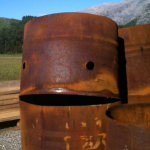